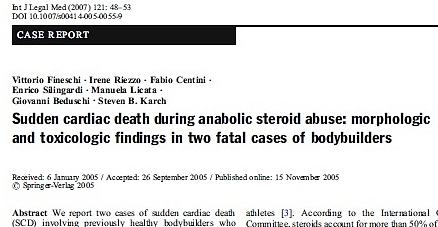 In today’s fitness industry it is easy to fall prey to the false notion that bigger is always better, and bigger comes without health consequences.

The images below are of heart tissue taken from two young bodybuilders who unfortunately passed away from sudden cardiac death. These two cases are similar to previous studies suggesting the type of cardiac tissue (cardiac myocytes) you grow while abusing anabolic steroids is scarred with fibrosis.

”A 29-year-old bodybuilder suddenly collapsed after dinner in his apartment. He had a weight lifting workout at the gymnasium a few hours before. Cardiopulmonary resuscitation initiated by an emergency physician was unsuccessful. According to friends of the deceased, he had been taking anabolic steroids (testosterone, nandrolone, and stanozolol) parenterally for several years mainly in an effort to improve his appearance. Several glass vials were found in his room and were labeled Winstrol (stanozolol), Deca (nandrolone), Testoviron Depot, and Andriol (testosterone) (1).”

Case 1 heart demonstrated in figure 1 below. 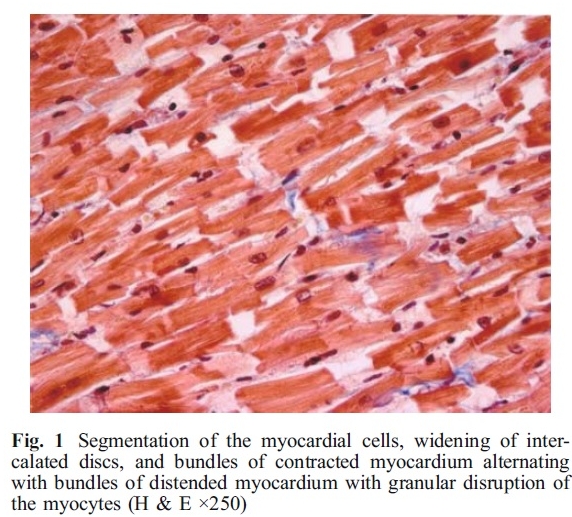 “A 30-year-old male, first an amateur, and later a competitive bodybuilder, who worked out regularly at the gymnasium, suddenly collapsed at home and was pronounced dead by an emergency physician who does not start cardiopulmonary resuscitation. He had a weight lifting workout at the gymnasium a few hours before. In an ashtray near the body, a 2-ml vial of nandrolone decanoate was found along with a used 2.5-ml syringe. The apartment contained a veritable arsenal of drugs, most of which fell into the AAS category. All witnesses confirmed that the subject had started using AAS approximately 6 months prior to his death (1).”

What were they taking?

“In both cases, the morphologic findings are, in combination with the toxicologic findings, sufficient to explain the deaths as related to the cardiac effects of AAS abuse [7]. In both cases, blood and/or urine revealed the presence of nandrolone and its principal metabolite (19-norandrosterone). A thorough scene investigation documents the subjects’ use of stanozolol and nandrolone (presumably “nandrolone decanoate” as found in the ashtray). Because the metabolite was not normalized to the creatinine ratio, little can be concluded about the urine concentration, but the values found here are comparable to previously reported values (1).”

There are various proposed mechanisms suggesting the pathological means by which androgenic anabolic steroids appear to increase risk of sudden cardiac death. These include coronary artery vasospasm (similar to cocaine), atherogenesis, direct injury to cardiac myocytes, and thrombosis (1).

These two case studies add support to the direct injury model. In simple terms, picture a fatty steak infiltrated with fibrosis, now picture that steak trying to expand, fill with adequate blood volume, and contract properly to perfuse the body. Unfortunately, these structural changes are a recipe for heart disease. See figure below. (Image source: Christoph Ahlgrim and Maya Guglin, 2009). 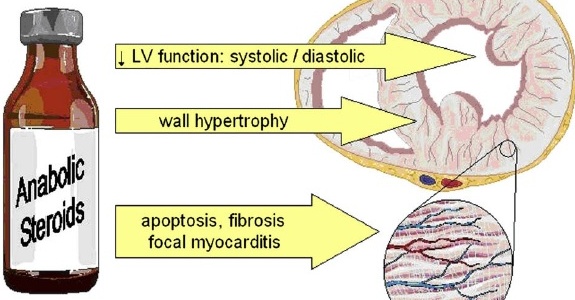 “Our findings support an emerging consensus that the effects of vigorous weight training, combined with anabolic steroid use and increased androgen sensitivity, may predispose these young men to myocardial injury and even SCD (sudden cardiac death) (1).”

Bigger is not always better, and bigger may also come with fatal consequences.

Last year marked 20 years of lifetime drug-free lifting for me and it is a dream come true to help others as a Canadian “doc who lifts”. Safe and scientific training methods, a healthy diet full of fruits, veggies, lean proteins and no use of anabolic drugs has ensured longevity in bodybuilding.

The image below was taken prior to medical school while working as a fitness model for various magazines in Canada and the USA. (Image credit: Paul Buceta)

Dr. Aric Sudicky co-founded London, Ontario’s first medically integrated personal training and nutrition program. He is a former Canadian Fitness Professional of the Year award winner, an obesity and exercise researcher, and is currently completing his residency training in family medicine. You can follow Aric via his facebook or twitter pages. 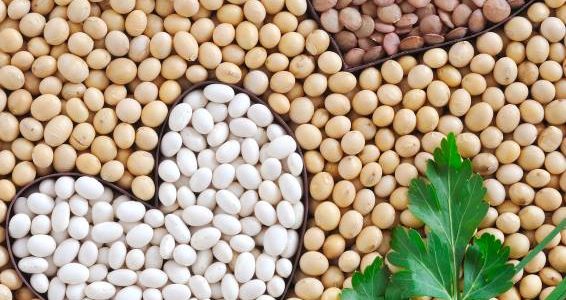 Vegan diet for “everyone”? Not so fast.

There is a troubling trend in clinical nutrition where a good thing is pushed to misinformed extremes. For example, data supports the benefits of a plant-focused diet, including for cardiovascular risk reduction. See here http://www.onlinejacc.org/content/69/9/1172 . However, this does not mean everyone, including the frail elderly and high-performance athletes, must follow a one-size-fits-all strict vegan diet (ie zero animal sources).

Equally concerning is when one-size-fits-all diet beliefs turn into fear mongering entire food groups that do not fit into dogma. For example, I received a tweet from a “vegan for everyone” social media influencer suggesting a strong association between dairy consumption and cancer. The weight of data suggests dairy benefits, but in 2017, social media personalities tweeting anti-dairy is a form of health misinformation some people will unfortunately believe. See dairy benefits here https://www.ncbi.nlm.nih.gov/pubmed/27882862 and here https://www.ncbi.nlm.nih.gov/pubmed/25757894 .

There is currently no single “best” diet every human should consume, see here https://www.ncbi.nlm.nih.gov/pubmed/25182101 . Certain general patterns of feeding, including fruits, vegetables, plant fats, whey protein, and fatty fish are reasonable options to consider. However, the best type of healthy diet is the one that works for the individual. This includes a vegan approach, which I continue to support for those individuals who prefer it.

Pick what works for you and try not to fear monger those preferring their own customized variant of healthful eating patterns. 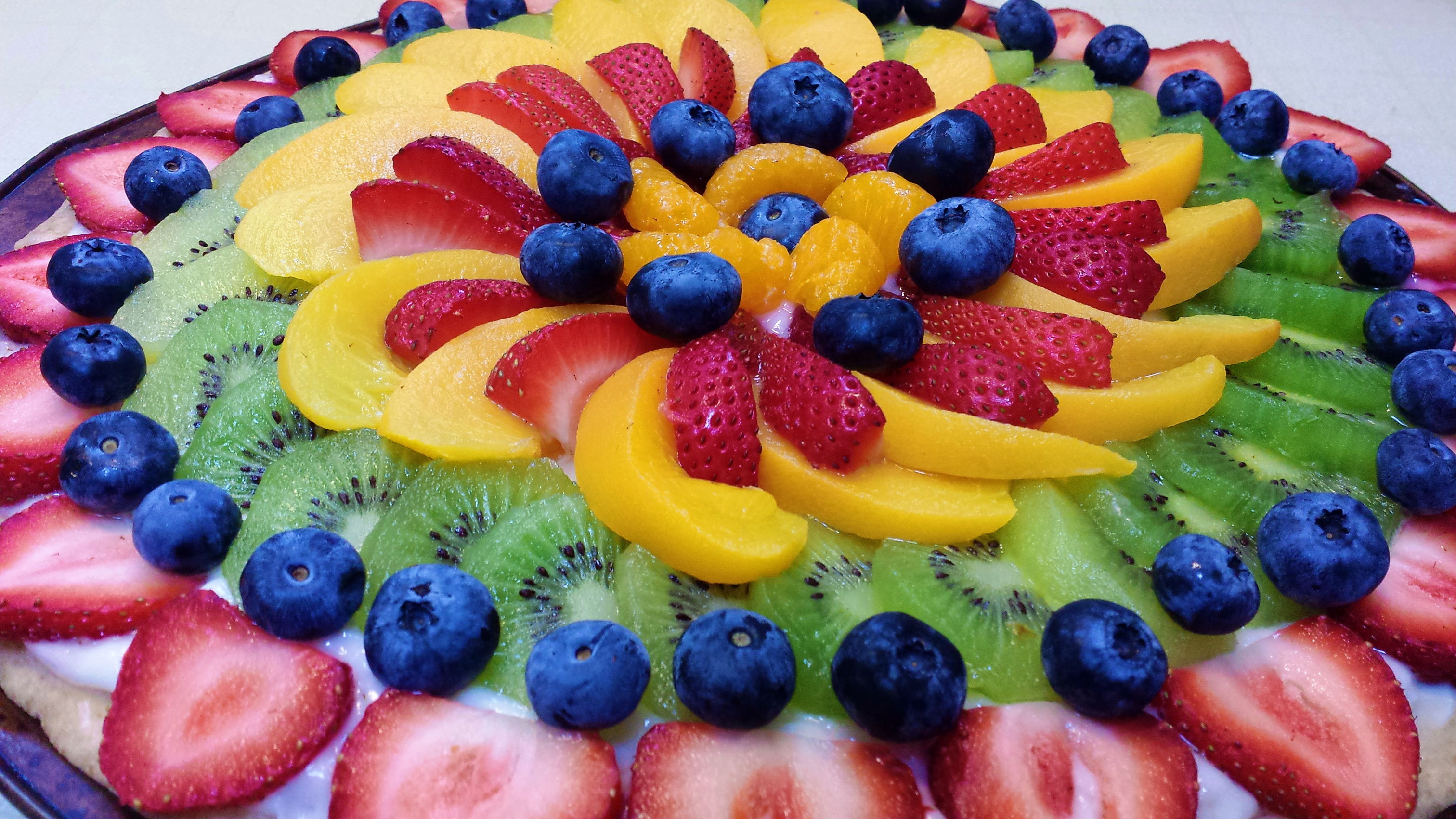 Dr. Aric Sudicky co-founded London, Ontario’s first medically integrated personal training and nutrition program. He is a former Canadian Fitness Professional of the Year award winner, an obesity and exercise researcher, and is currently completing his residency training in family medicine. You can follow Aric via his facebook or twitter pages.